A native of Xian, China, Yuling Huang-Davie studied at the Beijing Central Conservatory under Professor Li Qi-Fang, one of China's internationally renowned professors of piano. After arriving in the United States in 1991, Huang-Davie received her Master's degree in piano performance from Shenandoah Conservatory (Winchester, VA), where she studied with Elizabeth Temple. In 1998, she earned her Doctor of Music degree from Florida State University’s College of Music studying under the nationally renowned pianist, Dr. Carolyn Bridger.

Dr. Huang-Davie has collaborated with leading conductors, such as Michael Singher, Mark Gibson, Steven Mosteller, and Douglas Fisher. Her concert performances and master class engagements have brought her to perform on university stages across China and before the Arts Club of Washington D.C., in addition to the music departments of Tulane, Memphis, James Madison University, Louisiana State University, West Virginia, among others.

Dr. Huang-Davie has to her credit awards for her musical expertise including the Distinguished Alumni Award for Outstanding Professional Achievement from the Conservatory of Shenandoah University, and twice was named recipient of both the Marion Park Lewis Foundation for the Arts Award and the Tallahassee Music Guild Scholarship Award. In addition, she received a scholarship from the acclaimed Florida State Opera Company to serve as an assistant music coach.

Burton: Sonatina for Flute and Piano, I 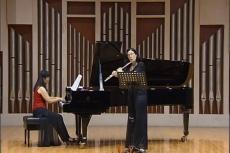