The 2020 School of Music Entrance and Scholarship Audition Dates are now available!  They include:

The School of Music and Performing Arts is pleased to welcome three new faculty members this fall.

Ms. Ailee Pardi, a fiddler and vocalist from Edgewood, Washington, is about to be the first student at the University of Louisiana at Lafayette to receive its Bachelor of Arts in Music with a concentration in Traditional Music. 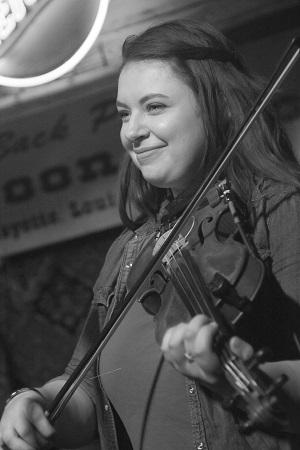 Ms. Pardi developed an interest in Cajun and Creole music as a teenager, after attending Cajun/Creole week at the Augusta Heritage Center in Elkins, West Virginia, several summers in a row. Cajun/Creole week at Augusta started in the 1980s under the supervision of Cajun fiddler Dewey Balfa, and still employs several musicians from Louisiana on its faculty each year. It was there that Ms. Pardi first heard that she could continue studying Cajun music in college at UL Lafayette.

She began her studies as a traditional music major at UL Lafayette in the fall of 2016 after passing an audition on her major instrument with David Greely, the university's studio fiddle teacher at the time. In the course of her studies, she took private fiddle lessons with Greely, Brazos Huval, and Kevin Wimmer, and she studied Cajun and Creole French vocals (her secondary instrument) with David Greely and Megan Brown Constantin. The degree program also requires students to choose a related minor; Ms. Pardi chose French.

For her senior project, Ms. Pardi wrote a paper and presented a lecture-recital on the topic of Cajun fiddle tunes. Prior to that, she played fiddle and sang for the Angelle Aces, the university's Cajun-band-for-credit, under the direction (alternately) of Kristi Guillory and Roddie Romero. This semester, she added some bluegrass to her repertoire by joining Vermilion Express, the university's bluegrass band, under the direction of Dr. Len Springer.

When asked to reflect on her education, Ms. Pardi recently said, "I found the traditional music program at the university of Louisiana at Lafayette to be a fantastic instance of having an aurally transmitted music brought seamlessly into an academic setting. This program helped me achieve some major goals, both musically and scholastically, and I feel honored to have been a part of it."

UL Lafayette is one of only two dozen in North America offering hands-on musical instruction in oral traditions, and the only one to feature Cajun and Creole French music of Louisiana. Courses offered include group instruction for beginners and advanced one-on-one instruction in Cajun fiddle, accordion, and French vocals; songwriting; and small ensembles for credit (Cajun, zydeco, bluegrass, and blues). It also offers music history and appreciation classes that focus on these styles of music.

The university's program in traditional music began operation in 2010 with the hiring of Dr. Mark DeWitt as the first holder of the Dr. Tommy Comeaux Endowed Chair in Traditional Music. The mission of the endowed chair is to advance the preservation, instruction, and performance of traditional music with an emphasis on traditions that have developed in Acadiana. The chair was established in 2008 due to the efforts of the friends of Dr. Tommy Comeaux, a musician and physician in Lafayette who was killed in a bicycling accident in 1997; matching funds were provided by the state of Louisiana's Board of Regents.