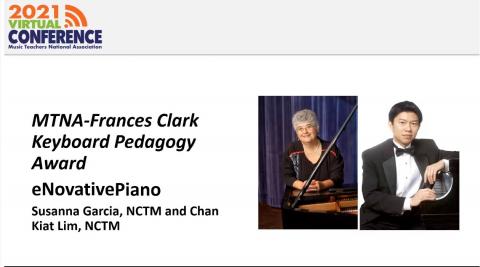 Garcia holds MM and DMA degrees from the University of Texas at Austin and a BM degree from Texas A&M University-Corpus Christi, and has been on the UL Music faculty since 1990. She holds the Ruth Stodghill Girard Regents Endowed Professorship in Music and in 2001 was named a University of Louisiana Distinguished Professor. In 2012, she was honored as an MTNA FOUNDATION Fellow, and in 2013 she received the Outstanding Teacher Award from the Louisiana MTA. Her work in developing eNovativePiano was recognized with the 2015 “Research Excellence Award” for the University of Louisiana at Lafayette College of the Arts and in the 2019 Piano Magazine article “Piano Pedagogy’s Towers of Technology.”

Garcia has performed concerts across the United States and in Canada, Mexico, Italy, and Ghana. She performs with William Chapman Nyaho as the Nyaho/Garcia Duo.

Lim is a professor of piano at UL Lafayette, where he holds the Margaret Chauvin Steen Villemez Professorship in Music. In 2015, he was awarded the Louisiana Music Teachers Association Outstanding Teacher Award. In the same year, he received the Distinguished Professor Award from the University of Louisiana at Lafayette. Most recently in 2020, he was honored as an MTNA Foundation Fellow.

Lim received music certifications in piano, violin, and theory from the Associated Board of the Royal Schools of Music and the Trinity College of Music, London. He holds a BM degree from West Virginia University and MM and DMA degrees from the College-Conservatory of Music at the University of Cincinnati.

MTNA is a nonprofit organization of independent and collegiate music teachers committed to furthering the art of music through teaching, performance, composition, and scholarly research. Founded in 1876, MTNA is the oldest professional music teacher’s association in the United States.