What do Tyler, the Creator, The War on Drugs, and Earth, Wind, and Fire have in common?

A vital team member from those iconic artists has conducted masterclasses or has been a guest speaker in various music business classes offered at the University of Louisiana at Lafayette.

Music business students absorbed the wisdom and expertise from on-site guests like artist manager Ami Spishock, representing The War on Drugs. She founded Fort William Management, a female-run, female-staffed management company. Similarly, students engaged via Zoom with Alex Prince, production manager for Tyler, the Creator, and David L. Norman, Tour Manager for Earth, Wind, and Fire. In each instance, our “guest” instructors shared experiences, tips, and tribulations. During these sessions, students gain intimate knowledge of the industry from those professionals on the front line and earn an important opportunity to network with these individuals. 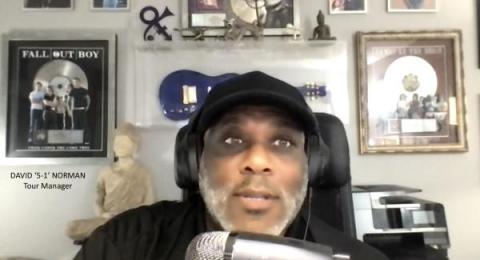 Over the fall semester, music business students also learned from these other professionals:

Guitar hero Angel Vivaldi whose blend of spell-binding guitar anthems and tasteful yet virtuosic playing has reached and inspired tens of millions. From his signature guitars to being a part of Vext and Mutiny Within to appearing on numerous records with Marty Freidman, Nuno Bettencourt, Alex Skolnick (Testament), and Jeff Loomis, Angel continues to operate as a self-managed, independent artist.

Grammy-award winning artist, composer, educator, and producer Adonis Rose from the city of New Orleans, LA. Adonis has played and recorded with the biggest names in Jazz, including Terence Blanchard, Betty Carter, Dianne Reeves, Marcus Roberts, Harry Connick, Jr., and Wynton Marsalis, and has performed on the most renowned stages in the world such as Carnegie Hall, Olympia in Paris, North Sea Jazz Festival, Umbria, Birdland, Apollo Theater, Newport Jazz Festival, and Jazz at Lincoln Center, to name a few.

Beat producer LeauxFi, who has produced hits for artists like Lil Tjay, Lil Mosey, Boosie, Killy, and more. Believing in hard work and good business, he forged his own group, the Atlanta-based The TEN. The group has worked on songs for artists like Tory Lanez, Bad Bunny, and Dave East among others.

And that's just the fall semester!